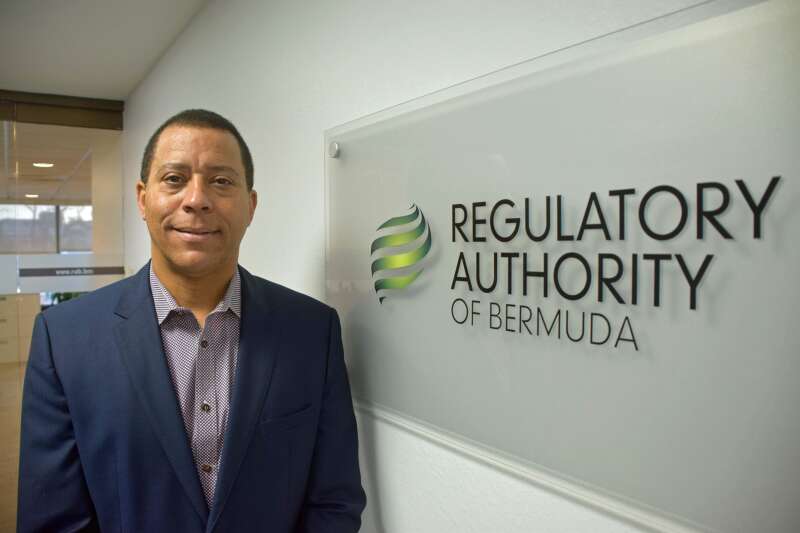 The former interim chief executive of the telecommunications and electricity watchdog is suing the organisation after his $250,000 contract was cut short.

Lawyers for Aaron Smith said his agreement with the Regulatory Authority of Bermuda was terminated last October, more than three months early.

In a writ filed at the Supreme Court, he asked for $74,404 in compensation.

Mr Smith was the fifth person to lead the organisation since it was established by Act of Parliament in 2011.

Wakefield Quin, acting for Mr Smith, said in a writ that his post as interim chief executive was agreed on February 17, 2018.

They added the contract was fixed for a year and would end on February 16, 2019, unless it was terminated earlier “in accordance with specific provisions”.

The writ, which was published on the Offshore Alert website, claimed the RAB agreed to pay a total of $250,000 to Mr Smith in monthly instalments or prorated for any period of less than a month.

However, the writ said: “On the 31st October, 2018, the defendant, in breach of contract, terminated the agreement causing the plaintiff loss and damage.”

It added the RAB “purported” to end the agreement under provisions that related to serious misconduct or criminality, bringing the organisation into serious disrepute or prejudicing its business interests.

The clauses were said to have allowed the RA to terminate the contract without being liable to pay Mr Smith more money.

However, the writ said: “The plaintiff denies that he at any time breached these provisions or any other provision of the agreement.”

Wakefield Quin said that on July 18, 2018, Michael Swain, then the RAB’s recently hired chief financial officer who was nearing the end of his probationary period, wrote to Mr Smith and told him that he needed to relocate to France.

The writ added: “Swain was distraught and upset when he presented the letter to the plaintiff.

“He was offering to continue to work in his position as CFO from abroad remotely until his circumstances changed or other arrangements could be made, but he needed to leave Bermuda immediately to be with his wife.”

The writ said Mr Smith notified the RAB’s board in person and in an e-mail the following day.

It added that he believed the matter to be a “human resource management issue” and his responsibility.

The document claimed various options were considered and it was Mr Smith’s “primary concern” that there was continuity.

It said Mr Swain had indicated he could work from overseas.

The writ alleged the RAB was open to a consultancy arrangement and, fully informed about the situation, paid Mr Swain for August.

Lawyers for the RAB were said to have sent Mr Swain a draft consultancy agreement as negotiations continued.

The writ added: “Swain surprised all concerned and advanced the position that he was now confirmed in his post as an employee.

“Negotiations broke down with Swain and the defendant terminated its relationship with Swain by way of letter dated the 27th September 2018.

“As a result of the above, the defendant then terminated the plaintiff’s contract alleging that he was in breach of the agreement by his handling of the Swain employment matter.”

Wakefield Quin said that Mr Smith would argue he acted in a professional manner and “fulfilled his contractual responsibilities to the defendant to a high standard”.

The writ said he would claim that it was the actions of the RAB’s board that “compromised the interests of the Regulatory Authority”.

Mr Smith is seeking $74,404, which was the balance owed under his agreement, or alternatively damages, plus interest and costs. The RAB announced its fourth chief executive, Denton Williams, in January, three months after he resigned as chief operating officer at Ascendant Group, the parent company of Belco.

Its first CEO, Philip Micallef, was appointed in October 2012, but left in September 2014 for personal reasons.

He was followed by Robert Watson in January 2015, who left nine months later, also for personal reasons, and Kyle Masters, then a legal adviser to the RAB, taking the helm as interim CEO.

Matthew Copeland was appointed in March 2016 and stepped down in February 2018, when Mr Smith took the role on an interim basis.

Mr Swain said: “I am presently seeking legal advice and have no comment at this time.”

The writ was witnessed by Chief Justice Narinder Hargun on February 4 and the RAB was required to respond within 14 days of it being served.

A spokeswoman said: “The authority does not comment on matters before the court.”

Update• This story has been updated to include a statement from Mr Swain.

It is The Royal Gazette‘s policy not to allow comments on stories regarding court cases. As we are legally liable for any slanderous or defamatory comments made on our website, this move is for our protection as well as that of our readers.